A Note From Hagberg’s Regarding Coronavirus. Read more 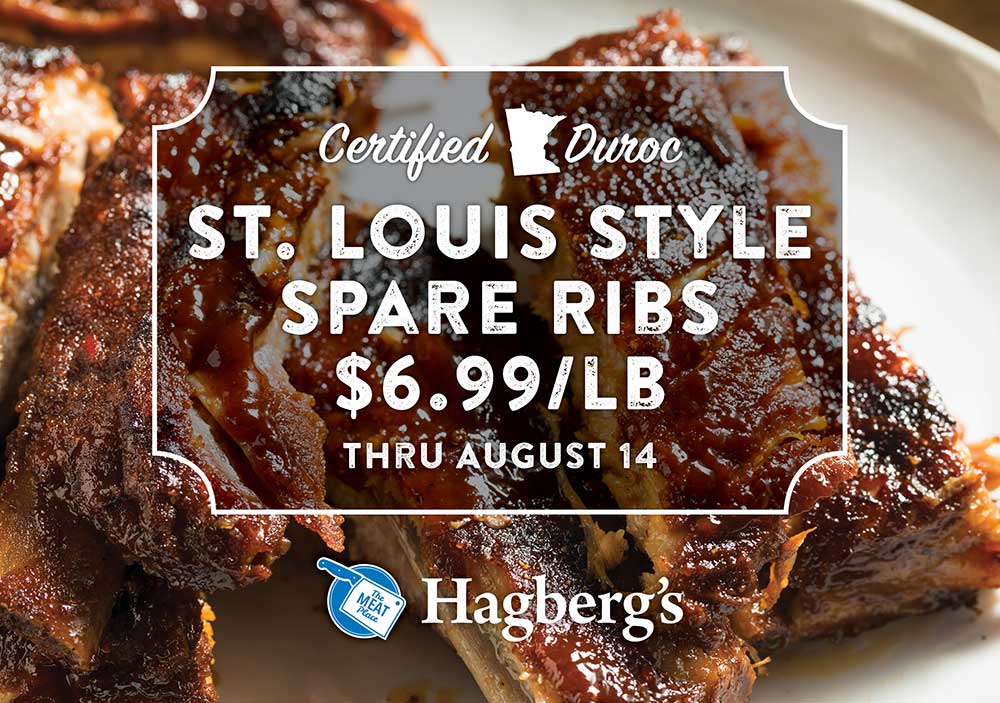 While every cut from our meat case or dish from the deli is special, we feature a few of our favorites each week.

Marinated Grill Steak $12.99/lb
This week we’re featuring our MARINATED GRILL STEAK. It’s a Teres Major cut sometimes called a “Petite Chuck Tender” or “Mock Tenderloin” because it’s sort of like a smaller version of a tenderloin (where the filet mignon comes from). We cut them about 8 ounces each, and they’re very tender, especially in the hands of an experienced butcher, and marinated with Hagberg’s marinade recipe. Our marinade includes black pepper and the essence of blue cheese, which brings a nice flavor profile without being strong. Normally $14.99/lb, our Marinated Grill Steak is specially priced through August 14th at only $12.99/lb.

Pear-Adise Blues Brats $5.99/lb
The PEAR-ADISE BLUES BRAT IS BACK!! This incredible tasting awesomeness is created with bleu cheese and fermented pears from St. Paul’s Fermentation Station. Regularly $6.99/lb, this week they’re just $5.99/lb! And we’re lucky to be one of the Fermentation Station local retailers in the area, so check out their other offerings, too.

From The Smoker – Ring Bologna  $7.99/lb
Is it Bologna or Baloney? Here’s our take. Bologna is an old-school sausage made of cooked and smoked finely ground meat. Baloney is foolish or deceptive talk. So, no baloney, Hagberg’s Old-School Ring BOLOGNA is AWESOME, and it’s just $7.99/lb through August 14th. Warm some up on the grill or in your smoker, where you can add your own profile to our smokey base.